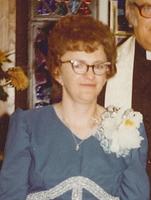 Helen Ann Howell was born on a farm in Adair County, Iowa on March 5, 1936 to parents Velma and Cliff Howell. She had an older brother Eldon. Helen grew up on farms in southwest Iowa and graduated from Villisca High School in the class of 1955. Some time after graduation she moved to town to go to work. She moved into an apartment in the house of her Aunt Goldie. So even though she was on her own, she was still closely watched by family. Helen eventually got a job at a bank and held that job for the next 17 years and continued in that industry until her retirement in 2001 from U.S. Bank. Helen's fathers health began to fail and her parents also moved to town and Helen then moved in with them. After her father's passing in 1961 Helen continued to live with her mother. During this time Helen was a member of the bank bowling team and was a pretty fair bowler. She was well liked by her coworkers and she really enjoyed her bowling team. Helen also did several paint by number projects that were large and very well done. She was very close to her mom and her mom kept a very close watch on her only daughter. Eldon began to play more a father role in Helen's life at this point and helped her with financial decisions and helped her buying cars. Family was always important to Helen and was very close to her niece Velma. Helen wasn't a particularly good cook, but her candies and desserts were always wonderful. In the 60's she made 100 popcorn balls for the trick or treaters every year and seldom had any left. Her divinity at Christmas was excellent and once she moved to Tacoma, the air had too much moisture and she couldn't make it anymore. For years her pecan pie at Thanksgiving was a must and her stuffed crab puffs on Christmas eve were always a big hit. In 1972, Helen's mother passed away and Helen was on her own for the first time. Her niece Velma moved in with her and they lived together for a year. Helen began to blossom that year. The girls had a fun time that year and the living arrangement worked well. Velma did all the cooking (except for the pies for Thanksgiving that year) and Helen did all the clean up. It worked really well. Helen enjoyed having company for meals and if she was invited to someones house for a meal, it wasn't long until the invitation was reciprocated. In 1973, Velma moved out to get married and Helen was truly on her own. She managed just fine and dated some. On November 4, 1974 she married Stan Dytrych in Red Oak, Iowa. In 1978, Stan and Helen moved to Tacoma to be closer to family. Indeed they were - they lived a block from Velma and her family and just a bit father from Eldon and Belva. Helen always made friends with her neighbors and knew all her neighbors and enjoyed visiting with them and having coffee with them. Stan did a lot of woodworking projects and many times Helen helped with the painting and other artistic touches. Many family and friends have some of these projects today. Helen was also a collector; she collected stamps, Hummell figurines, Danbury Mint Garfield collectibles and other Garfield items, all the new quarters when they came out, spoons, recipes, and of course Mariner items. After retiring, Helen began doing plastic canvas work and made many lovely and interesting projects. Helen was close to her family but she had some other loves -- Snoopy, Garfield, dachshund dogs, and the Mariners. You were always safe with Christmas and birthday gifts that had Snoopy, Garfield, or the Mariners. She knew when the Mariners played, if they won or lost and the score, and when they would play again. Edgar Martinez was her guy. And Aunt Helen was always getting the nieces and nephews the latest hot new toy for birthdays and Christmas. The year that Tickle Me Elmo was the hottest item, Aunt Helen had bought Alycia hers long before they were unavailable. Aunt Helen got Heather started on her Holiday Barbie Collection. Once she started Heather got one every year, she must have 15-20 by now, thanks to Aunt Helen. After Stan was gone Helen's health began to fail and she spent her last few years in assisted living at Charlton Place here in Tacoma. Everyone at Charlton Place knew Helen and when you walked down the halls everyone know her and always spoke to her. She spent her last few months at Manor Care Nursing Home where they remembered her from Stan's time at the facility. She was well liked by everyone and will be missed by many.