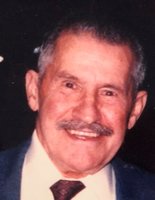 Joseph (Joe)Cusato was born in Tacoma on August 12, 1915, at 1028 S. State St., to Nicola & Maria (Errigo) Cusato. He passed away March 23, 2018 in Tacoma, WA. Joe was the last of four brothers, Dominick, Sam & Mike. His beloved wife, Berna, preceded him in death in 2015. Joe and Berna were married for 49 years. Even though Berna was in a care facility for the last few years, they were always together in their hearts. Joe's children, Richard, Carolyn (Susie) and Joel (Joey) also preceded him in death. Joe is survived by son, Jeff of Tacoma, step daughters, Carla Lee, of Tacoma; Mary Ballard, of Prescott, WA; and Judy (Gary) Letzring, of Olympia. He is also survived by 12 grandchildren, 13 great grandchildren, 8 great-great grandchildren and many nieces, nephews and cousins. We will all miss him very much! Joe graduated from Lincoln High School in 1935, served in the Washington State Guard and later with the Washington National Guard. Being one of the oldest living Lincoln H.S. graduates, Joe was Grand Marshall of Lincoln H.S. 100th celebration. Joe, a retired plumber, was a member of Local 26 Plumbers and Pipe Fitters Union. He was a member of Tacoma Elks 174 for over 50 years; a member of the Christopher Columbus Society; a life member of the Bellarmine Boosters and member of Holy Cross Men's Club. Joe had a love for Bellarmine where he spent hours, days or weeks in preparation for carnivals, garage sales, bingo and Father Webber's famous "October Fest" Bash (now called pride) and working security with Nick and crew. Joe did most of the pipe work and setting of pumps for the irrigation of the athletic fields and other projects on campus. Joe and Berna enjoyed bowling and were members of several leagues. After retirement they did a lot of traveling in their motor home, spent many winters in Yuma, two trips to Alaska (once in their camper and one in a motor home), travelled to the Florida Keys, Cape Cod, across Canada, Cabos San Lucas, MX and many points of interest in between. They also spent two glorious weeks travelling in Italy, the birth place of Joe's parents and brothers, Dominick and Sam. Everyone enjoyed Joe's wonderful biscotti. Mass of Christian Burial will be held at Holy Cross Church, 5510 N. 44th, Tacoma on Thursday, April 5 11:00AM. There will be a viewing before the service. Reception will follow in the Church Hall with interment at Calvary Cemetery where he will once again be reunited with his beloved Berna. Please share memories and condolences online at www.pipermorleymellingerfh.com 253-472-3353 In lieu of flowers, Joe requests remembrances be sent to the Bellarmine Scholarship Fund.