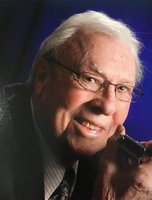 Andrew A. Labrecque, 95, passed away peacefully on January 13, 2018. He was born in 1922 in Debden, Saskatchewan, Canada, the son of Andre and Emma (Chalafour) Labrecque. He moved with his family to Moxee, Washington as a young child. His parents raised hops and Andrew was kept very busy on the farm. He attended Marquette High School in Yakima where he excelled in football. He entered the US Navy during World War II. He served at San Diego and and for a period of time in the South Pacific. He married Laura Reis in Yakima June 16, 1947. They moved to Tacoma in 1951 where he raised his family. He was hard working and at one point held two jobs while he attended barber school. He was licensed in 1965 and worked as a barber for 35 years. Andrew was an active member of St. Ann's Catholic Church and served regularly as an usher and Eucharistic minister. He was a self taught harmonica player. He joined his wife Laura in performing comedy revues/musical events at the Lighthouse Senior Center and local nursing homes for more than twenty years. He will be missed for his warm smile and harmonica in hand. Preceded in death by his wife Laura. Survived by his sister Rita Wentlandt; his seven children Kathleen (Terry) Stewart, Janet Campbell, Bob (Diane) Labrecque, Don Labrecque, Gary (Jill) Labrecque, Patti (Casey) Custer and Michael Labrecque; and eleven grandchildren and sixteen great grand children. A special thank you is extended to the staff at Beta Adult Family Home for their care and support to Andrew during the past eighteen months and to Mary Bostwick. Funeral services will be held at St Ann Catholic Church, 7025 S Park Avenue, Tacoma, WA on Saturday February 3 10:00AM followed immediately by reception. Interment ceremonies at Calvary Cemetery. In lieu of flowers, donations may be made to St Ann Catholic Church or to the Lighthouse Senior Activity Center. Arrangements by Piper-Morley-Mellinger Funeral Home.