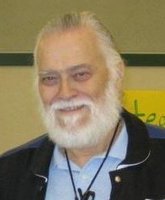 Marvin Lawrence "Larry" Jacka, age 75, beloved father, grandfather, uncle and friend, died November 24, 2015 surrounded by his family. He was born in Aberdeen, WA to Marvin and Kathleen Jacka. In 1941 the family moved to Tacoma, where Dad would spend the majority of his life. Dad attended Visitation Catholic school and St. Martins HS, graduating in 1958. Dad was drafted and spent time with the 7th Special Forces group at Fort Bragg, NC. After leaving the service Dad followed in his father's footsteps and started meat cutting while attending Fort Steilacoom Community College. After graduating, he went to work for Paccar. In 1981 he, along with some friends, formed CTI and HRT, where he worked until 1990. Dad was a member of Visitation Catholic Church, Elks Lodge #174, AMVETS Post #5, and the Eagles. His greatest pleasure was spending time with his family and friends. He loved going to his nephews, son, and grandsons football games on Friday nights, Husky games on Saturdays, and Seahawks games on Sunday. He was an avid pool, bridge, and dart player. Larry was preceded in death by his parents Marvin and Kathleen Jacka, brother Richard Jacka and sister Kathleen Bowen. He is survived by his two sisters, Patricia White of Tacoma and Mary Jacka of Settle; his loving children Jeff Jacka (Lisa) and Joy Paine (Don) of Tacoma and Michael Callies (Amy) of Van Alstyne, TX. 7 grandchildren; Tanner and Tyler Paine, Brennan and Abigail Jacka, Callie Maughan, and Tanner and Sawyer Callies. Also survived by numerous nieces and nephews.